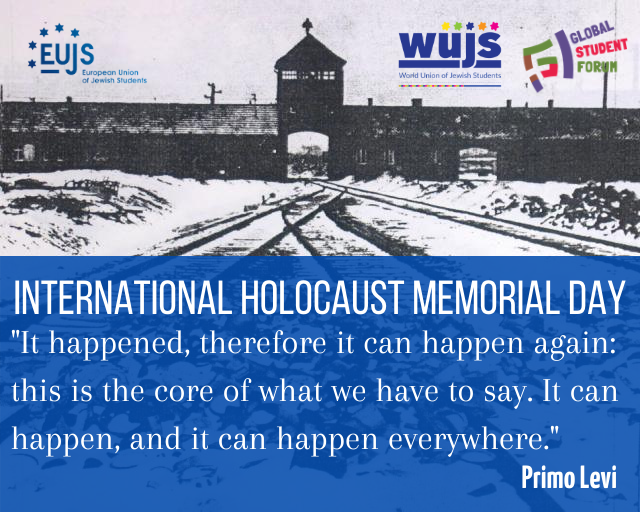 Education and the Memory of the Victims of the Holocaust

On the 27th of January 1945, in the final stage of the Second World War, the Red Army liberated Auschwitz-Birkenau, the largest complex of concentration and extermination camps built by the nazi regime.

With the criminal support of fascist governments in Italy, Spain and all the collaborationist forces in occupied territories of WWII, the nazi German government organised an industrialized system of  extermination and genocide, that targeted Jews and other communities considered inferior for the new society idealised by the regime.

The nazis and their collaborators killed:

As well as an undetermined number of communists, socialists, resistance members, other opposition members and homosexuals.

An incomprehendable number of human lives  were destroyed, countless  people were tortured, and systematically murdered by a state-led  de-humanising machine specifically designed by Nazi leaders and implemented by the military and bureaucracy under industrial support.

“It’s the product of a conception of the world that is driven towards its own consequences in a strong and coherent way: until this conception survives, its consequences endanger us.”

Primo Levi was an Italian Jew and Partisan that survived the Auschwitz concentration, his words are clear about the roots of the Holocaust and they show a terrible threat  for the future. Antisemitism flourished in the pre-war context after centuries of persecution against Jewish communities in Europe, and the nazi, and with that the fascist, ideology made it  a core element of their future societal project. This inhuman vision was always accompanied by a clear rejection of democratic values and human rights in the creation of authoritarian regimes. The repression of dissent and the attempt of creating a society without pluralism were represented by book burning and censorship, while opposers were enslaved and killed, both inside and outside of concentration camps.

Seventy-six years later, we can see a dangerous revival of neo-nazi and fascist narratives.  Antisemitism and xenophobia is on the rise again, and clearly xenophobic leaders ascended to positions of political power in some democracies,  sometimes even concretely talking about ethnic cleansing or religious based discrimination and persecution. Students should unite and act against anitsemtism and xenophobia, and no fertile ground should be left for hate and discrimination, because we know how these narratives can be the dangerous seeds for future suffering, and even genocide.