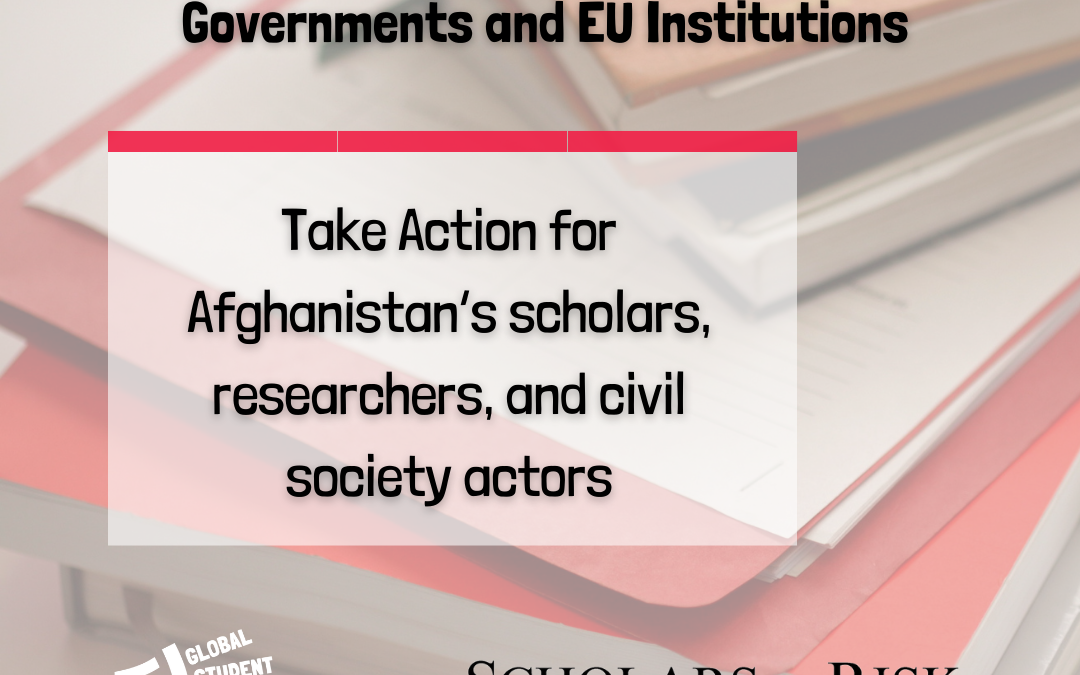 We, the undersigned higher education associations, networks, and leaders in the field of scholar protection, urge European governments and EU institutions to take immediate action to secure the lives and careers of Afghanistan’s scholars, students, and civil society actors.

Many of the undersigned organisations are leaders in the field of provision of support to researchers and scholars at risk. These include the Scholars at Risk Network (SAR), the PAUSE programme in France, the Philipp Schwartz Initiative of the Alexander von Humboldt Foundation, the Council for At-Risk Academics and the IIE’s Scholar Rescue Fund who arrange temporary positions at higher education institutions around the world for those who are unable to work safely in their home countries. European higher education institutions are at the forefront of these efforts: over the past two years, 80% of positions of safe haven arranged by SAR were in Europe.

Many have worked for or in partnership with EU institutions, NATO partners, European governments and other international and civil society organisations. Hundreds travelled to Europe to seek an education and returned to their homeland, dedicated to values of openness tolerance and free expression. These are not the values of the Taliban, so their lives are now at risk.

Timely government action can still make an enormous difference. We implore you to act on their behalf now. Specifically, we seek immediate action from European Governments and EU institutions to:

• Continue evacuation flights for as long as possible so as to include scholars, students, and civil society actors who have supported the forward-looking, pluralist vision of Afghanistan that the EU, European
governments, NATO partners and other international and civil society organisations embraced. Do not end flights until all are safely out who wish to leave the country.

• Create expedited complementary legal pathways for candidates who demonstrate an existing host institution, job, or sponsor, including for families, that would facilitate their arrival and earliest adjustment. Many European higher education institutions are ready to host scholars in temporary positions; capture that opportunity by expediting the processing of individuals for whom they are ready to step forward, and providing logistical support.

• Waive any intent-to-return and home residency requirements that may apply to visa applications for Afghan scholars and researchers for the foreseeable future. Barring full waiver, issue authoritative guidance to consular and border officials supporting a determination of satisfaction of the intent to return by showing a willingness to return in the absence of the Taliban, or a credible, durable and rebuttable demonstration that the individual would be able to return and live safely under the Taliban.

• Establish a dedicated EU fellowship scheme for researchers and scholars at risk, including scholars, students, and civil society actors from Afghanistan, especially women and ethnic and religious minorities, to undertake fellowships, lectureships, researcher positions, or temporary academic positions at European higher education institutions. See the EU-funded Inspireurope project recommendation for a dedicated scheme here. Some funds for such streams might be redirected from existing funds budgeted for Afghanistan programming, but which may not be possible to expend under the current conditions. Nevertheless, new funds will be required to meet the most urgent needs.

• Establish dedicated national fellowships for researchers and scholars at risk, including scholars, students, and civil society actors from Afghanistan, similar to existing national fellowship programmes run by the PAUSE programme in France and the Alexander von Humboldt Foundation’s Philipp Schwartz Initiative in Germany.

The window in which to take these steps, save lives, and redeem some measure of Europe’s investment in Afghanistan’s future is rapidly closing. Your urgent intervention is needed to mobilize the relevant departments and agencies.

The eroding situation in Afghanistan poses a threat not only to the lives of our colleagues still in Afghanistan, but to the future of that country. The moral leadership of the European Union including its commitment to human rights, rule-of-law, and multilateralism, is needed now more than ever, and it is imperative to see those commitments put into practice at this time of crisis.

The European higher education community is ready to do its part, but we need your help. If we move quickly, we can go a long way towards mitigating the worst of the threats and demonstrate continuing commitment to the future of Afghanistan and its people.

For more information and further action:

− For higher education institutions: If your institution is willing to
host at-risk individuals from Afghanistan, please complete the
survey at https://bit.ly/3kjPv9S