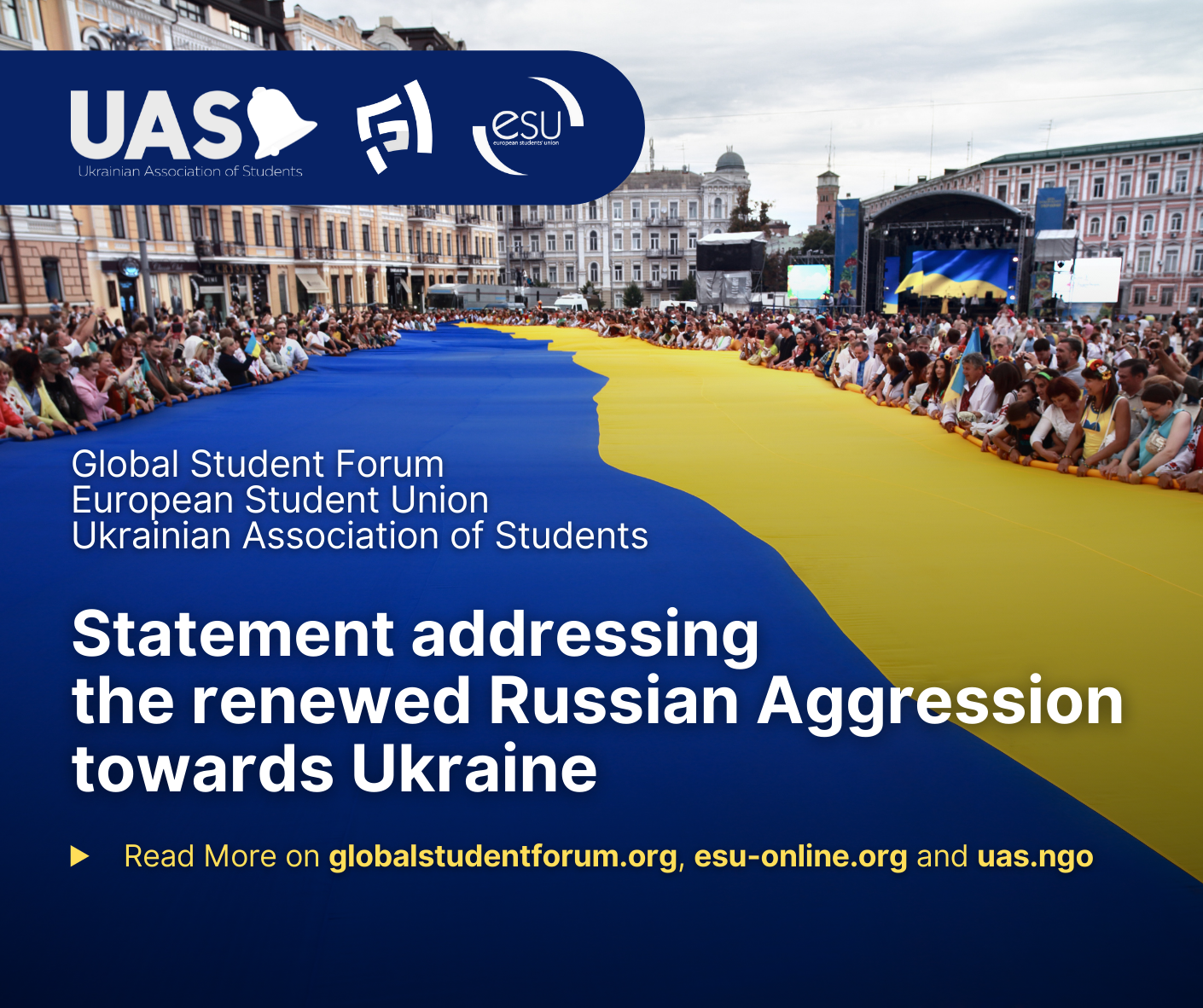 EN I Today, on the 24th of February, Russian forces have launched a military assault on neighbouring Ukraine, crossing its borders and bombing military targets near large cities. The Global Student Forum, the European Students’ Union and the Ukrainian Association of Students therefore express their solidarity with the Ukrainian people and all the educators and learners in the country as well as in the neighbouring territories that suffer from yet another Russian war of aggression and a progressively developing full scale invasion of Ukraine, a sovereign State with full rights to determine its own future.

As the shadows of war in Eastern Europe gather, for the first time since 1945 with a potential general escalation, the Global Student Forum, the European Students’ Union and the Ukrainian Association of Students makes a twofold appeal: as students from all over Europe and the world, we hope that our organisations can commit themselves to peace, detente and serious pacification. Recognizing the right to study as a human right means protecting a context in which people can freely develop their possibilities, departing  from an equal starting point, without the threat of armed confrontation endangering their education and livelihoods. A clash which, once again, takes place starting from an ethno-nationalist basis for the defense of spheres of power and influence.

We are also aware of the very serious situation in terms of restriction of the freedoms of research and study that a context of conflict can bring. A situation that Ukraine is not new to. In fact, as stated by ESU in 2018, “as a consequence of Russia’s act of aggression, martial law was implemented in Ukraine’s southern and eastern regions. However, instruments granted to the Government under martial law regime should be used with caution, as they allow restricting public gathering, free media and free movement of persons. It is necessary to follow the situation in order that neither the UN Covenants on Human Rights, nor the European Convention on Human Rights will be breached”.

We urge the Russian leadership to respect international law and the territorial integrity of Ukraine by immediately seeking de-escalation through pulling back troops and halting acts of aggression. We side with all NGOs, civil society organisations, governments and stakeholders who are committed to a serious, multilateral de-escalation, through the resumption of the Minsk protocols as a basis for honest negotiation on the fate of the disputed regions of eastern Ukraine.

We fight against military expansionism and ask the international organisations involved to take concrete steps for peace, respecting the dignity of all involved nations and populations. The potential social, humanitarian and migratory crisis that would derive from further escalation of a regional or general conflict could be unprecedented: we are ready to commit ourselves to support any hospitality policy, but even more so to prevent the risk of the potentially largest armed conflict in Europe since World War II, destroying countless innocent lives for the sake of imperial and revisionist motives.

The International Student Movement has a clear position: no to war and expansionism, yes to peace and the protection of the human and social right to learn and study in a peaceful context.