Emergency Panel “In the Firing Line: Understanding the Russian Invasion of the Ukraine” 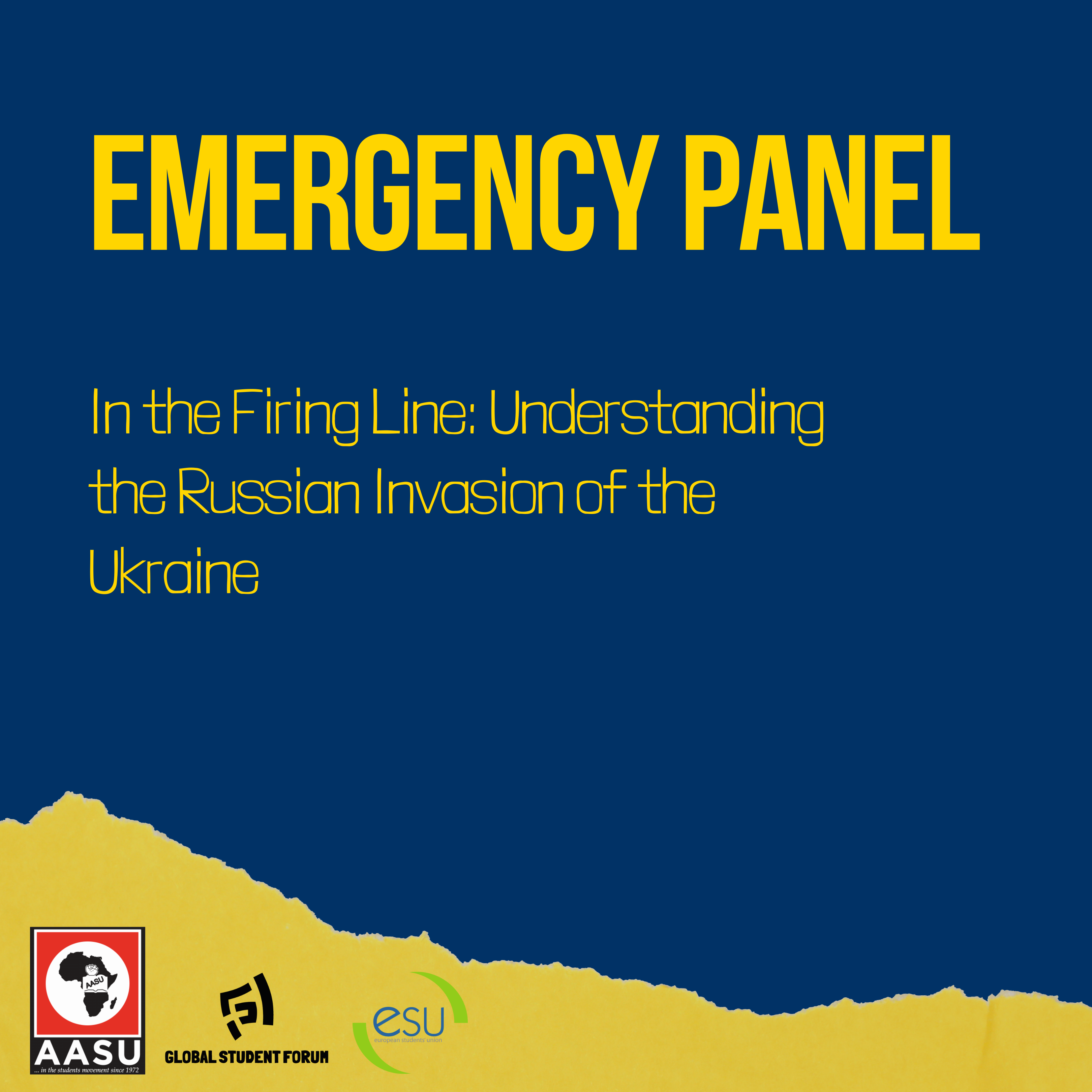 On the 24th of February 2022, Russian military vehicles breached the Ukrainian border.  Russian President Vladimir Putin in a pre-dawn television statement said that Russia did not plan on occupying the Ukraine, and demanded the Ukrainian army lay down their arms.  Ukraine declared that Putin had endorsed a “full-scale invasion” and President Volodymyr Zelensky announced that martial law was now being imposed across Ukraine.  Neighboring countries have been taking in Ukrainian refugees, while in the cities crowds have sought shelter in the Kyiv underground.

The Global Student Forum stands in solidarity with the students and wider publics of Ukraine.  They uphold the freedom of the Ukraine Association of Students alongside the European Student Union, and the various student diaspora in the Ukraine who are reflected in the membership of the regional platforms.  The global student movement stands against this invasion, and it’s imposition on human and student rights.

The Global Student Forum would like to invite you to the Facebook Live Stream Panel on the 10th of March from 6pm-7pm CET, “In the Firing Line: Understanding the Russian Invasion of the Ukraine”.

The Global Student Forum proposes to facilitate a panel of student, political and international civil society leaders in partnership with the European Student Union and the All-Africa Students’ Union, and upholding the central position of the Ukraine Association of Students.

The topic of the panel will be the humanitarian crisis derived from the war, with two intertwined focuses:

Education is heavily threatened by war, with both physical disruption of educational facilities and the impossibility for students and teachers to continue their activities while an invasion is happening. Consistent parts of the student populations are obliged to take part of the conflict or to leave the country, with concrete risks for survival in the short term and a negative impact on knowledge, skills and mental health in the longer term.

The people leaving are going to face different situations. While the European Union and its member states bordering Ukraine have started welcoming hundreds of thousands of refugees, and fast processes have been approved to admit national Ukranians, other standards are applied to citizens of other nations that are in the same exact way escaping from Ukraine. International students, people that migrated to Ukraine or that have been refugees in that country until last week, now are again obliged to leave and see the doors of other countries closed. Double standards are unacceptable, and racist policies are threatening people that deserve immediate protection without distinction.

The panel will be held in an online Zoom session that will be shared via social media through live streaming.  It will include national, regional and international political representation where the student body can openly engage with political figures on the invasion of Ukraine. The purpose of the panel will be to open a public reflection on the humanitarian crisis through new lenses. The human right based approach and the student perspective will be enriched by the presence of guests, in a moment of holistic understanding and strong solidarity towards all the people suffering and risking their lives for an unacceptable war.