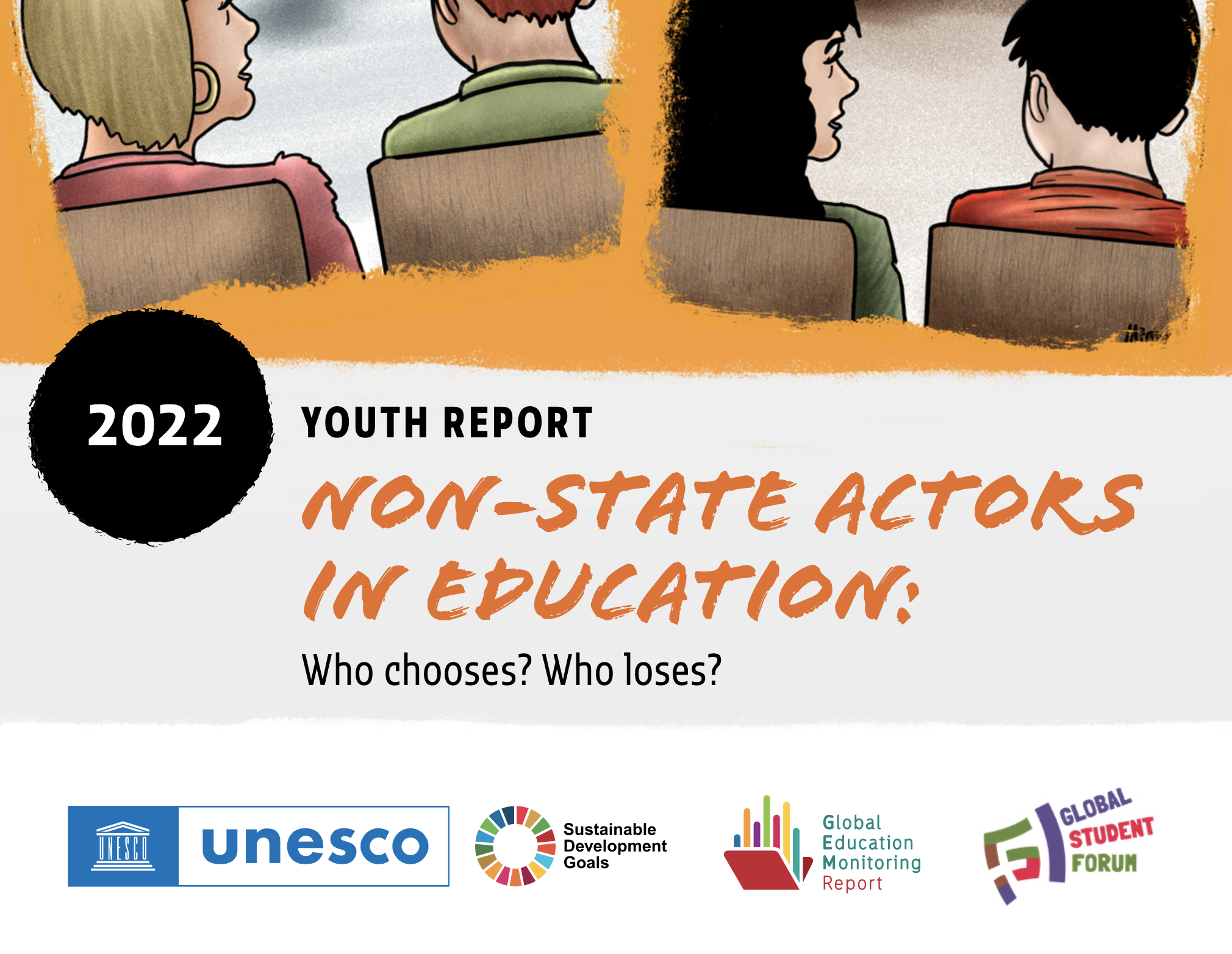 As the 82nd Board Meeting and 40- year anniversary celebration of the European Students’ Union begins, the Global Student Forum join UNESCO’s GEM Report #RighttheRules campaign urging policy leaders to strengthen oversight of private actors so that the poorest are not priced out of education.

Paris, Tuesday 24 May 2022 – Students from around the world have joined forces today via the Global StudentForum to support UNESCO’ Global Education Monitoring (GEM) campaign called #RightTheRules. The campaign warns governments that weak oversight of private actors is leading to rising inequality in education that excludes the most marginalised children. It calls for political leaders to fulfil the promise they made to provide 1 year of pre-primary and 12 years of free primary and secondary education for all.

The campaign was developed on the back of GEM’s flagship publication called: “Who Chooses, Who Loses?” which assesses the impact of non-state actors in education. It finds that costs for private education including private tuition, technologies and school fees are too high and are increasing the financial burden on low-income households. The Global  Student Forum (GSF) have partnered with GEM to release an accompanying youth report to mobilise support for the recommendations of the report highlighted in the #RightTheRules campaign.

The campaign draws attention to the hidden costs of education. Despite the promise of free schooling, parents are burdened with extra costs such as uniforms and books. One third of household education expenditure in low- and middle-income countries comes from households whose children attend public schools.

“The choices families in low-income countries are faced with are dire. They are either priced out of high-quality schools or forced into unregistered cheap ones, which are likely to offer lower quality of instruction. Yet only one in four countries regulates the amount of fees charged by private schools. This campaign is calling on governments to step up the oversight of private actors and ensure equity and inclusion are at the heart of their efforts”, said Sebastian Berger, Director  of the Global Student Forum.

Private schools and private supplementary tuition are also pushing up these costs for households. Globally, 3.2% of household budgets is spent on education on average but that rises to 6% in countries where a high share of enrolment is in private schools.

The sharp cost of education is especially felt by those who are trapped in poverty. The poorest families are being forced to borrow to send their children to school, according to the report’s findings. New analysis shows that an estimated 8% of households borrow, ranging from 6% in high-income to 12% in low-income countries, and rising above 30% in countries such as Haiti, Kenya, the Philippines and Uganda.

“We made a commitment to the world’s children to provide free primary and secondary education. This has not happened and as a result, non-state actors have stepped in to fill an important void – but the reality is that private schools can entrench societal inequalities. The young people are right in asking us to deliver on this promise, it is urgent we do so”, added the European Commissioner.

“Regulations are crucial in levelling the playing field and making sure that the most disadvantaged have an equal opportunity to thrive. The poorest should not be penalised because others are able to pay more for their education.”, concluded Manos Antoninis, Director of the Global Education Monitoring Report.

The campaign is calling on governments to:

About the Global Education Monitoring Report:

Established in 2002, the GEM Report is an editorially independent report, hosted and published by UNESCO. At the 2015 World Education Forum, it received a mandate from 160 governments to monitor and report on:

About the Global Students Forum:

The Global Student Forum (GSF) is the umbrella organisation of the international student movement and was founded in 2020 by the All-Africa Students Union (AASU), Commonwealth Students’ Association (CSA), European Students Union (ESU), Organising Bureau of European School Student Unions (OBESSU) and the Latin-American and Caribbean Continental Student Organisation (OCLAE). The GSF represents the interest of 202 member unions and student organisations from 122 countries and territories towards the decision making bodies of the international community.

More information on the Event:

The GEM Report, the Global Students Forum and Fédération des Associations Générales Étudiantes (FAGE) will co-host the global launch of the 2022 GEM Youth Report at the 40th anniversary celebration of FAGE.