Launch of the #RightTheRules in the Asia-Pacific Region 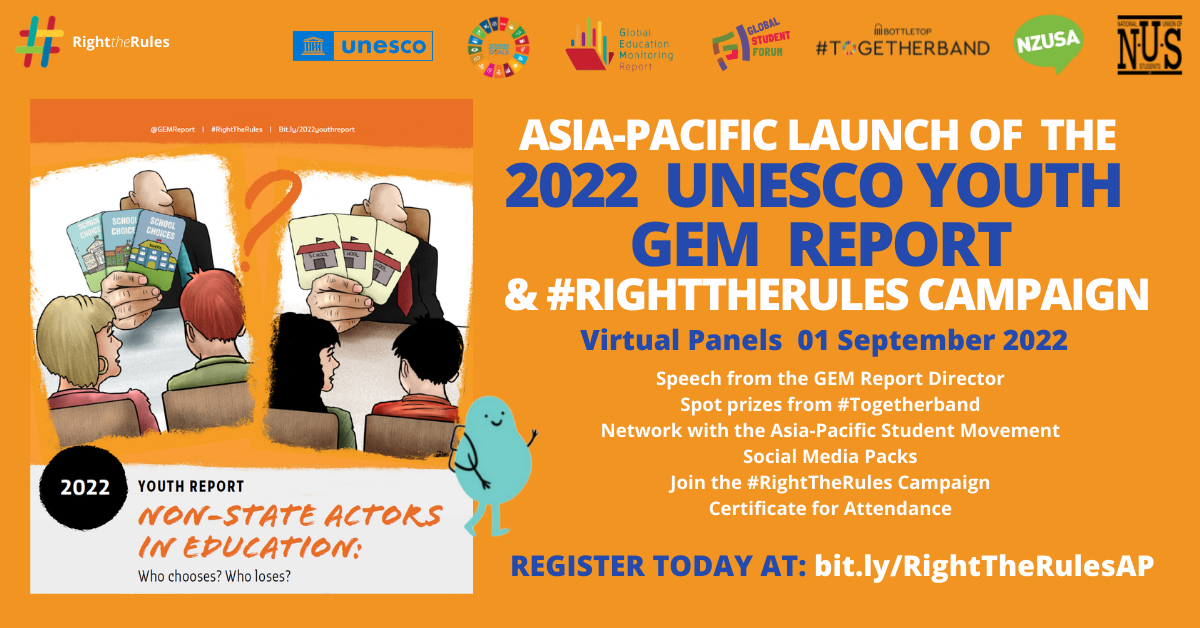 #RightTheRules in the Asia-Pacific Region

Author:  Ellen Dixon is the Consociate Member for the Global Student Forum, elected into her Steering Committee seat for the national students’ associations of Aotearoa New Zealand, Australia and Canada.  Ellen also contributes to the outreach to student federations across Asia and the Pacific Islands.  She is a Doctoral Scholar and critical theorist, who advocates for education beyond neoliberalism within her region and across the globe.

This statement is to support the Asia-Pacific launch of the UNESCO GEM 2022 Youth Report and the #RightTheRules campaign online, as of the 1st of September 2022.

We are the voice(s) of the many.

The region is one of extreme diversity.  It boasts some of the most populous countries previously identified, and some of the smallest in the world, including the Small Island Developing States in the Pacific.   This contributes to significant demographic challenges.  According to the UNFPA, the region experiences mega-trends, from mass humanitarian crises, to climate change, urbanisation, changes in digitisation, and mixed trends of employment.  To even conceptualise the Asia-Pacific as a region is to homogenise hugely diverse peoples in terms of their language, culture and ethnicity, beliefs and religion, and tribal affiliations.

But there is a commonality we typically share: the majority of us are from the Global South.  That is largely how we are viewed as a region.  Even those of us who are from developed countries, fall within the conceptual Asia-Pacific which has acted as a Western “catch-all” for colonial and post-colonial nation states.  This has been the Empire’s solution to manage the huge youth bulges in populations within this diverse region, and the social movements that originate in classrooms and lecture halls because of this.

So how do we #RightTheRules for the Asia-Pacific?

The Asia-Pacific launch of the UNESCO GEM 2022 Youth Report: “Who Chooses? Who Loses?” and the #RightTheRules campaign on the 1st of September 2022, demonstrates a key and important shift for student and youth engagement concerning education in the region.  Backed by the Global Education Monitoring Report and the Global Student Forum, and supported by BOTTLETOP’s #TOGETHERBAND, the New Zealand Union of Students’ Associations, and the National Union of Students Australia, we are able to create safe spaces to share our regional stories of non-state actors in education, where previously our voices were hidden behind others.

This also allows our student and youth to bring attention to the huge crises we are experiencing, including: children out of schools; human trafficking and child marriages; modern slavery and child soldiering; extreme poverty; ethno-religious and ethno-political persecution; stateless persons, refugees, and internally displaced persons; indigenous loss of ancestral lands; challenges to democracy; neo-colonisation; mental health issues; and the realities of climate change.  The dissolution of the Asian Students’ Association, the changing Commonwealth, neoliberalism and autocratic political regimes have crippled but not destroyed students’ associations and youth organisations across the region.

You will hear many #RightTheRules stories in the coming weeks, of the encounters of student and youth activists across the Asia-Pacific region.  They are stories of grief and intergenerational trauma concerning oppression, persecution, colonisation, corruption, exploitation, and poverty.  But they are also stories of hope, healing, and a desire for a truly equal education system, where students and youth are leading political, social, and economic change in their communities.  Their vision is for an education system that is not only equal in terms of inclusion, lifelong learning, teaching, digital resources and financing, but in respect to the values and dreams of the diverse communities of the Asia-Pacific.

When we respect our heritage, we create the space for a transformative education that not only liberates but births new worlds.

Liberal-democracies are intriguing as while they fight for human rights, they often forget the past.  They forget that most of these non-state actors in education were brought to life due to decisions made during the Industrial Revolution, which also endorsed the exploitation of the Asia-Pacific.  Yet simultaneously, the Empire brought opportunities for technological development, endorsing literacy in rural areas and poorer communities.  Education systems within the region always were a double-edged sword: an opportunity to liberate oneself from complex socio-economic conditions that were largely repressive, yet it required entering the systems set up by the Empire that was imposed upon the young people of the region.

Today, we are not much better.  Families across our region borrow money for basic education, households are plagued by hidden costs, while student debt is in the billions.  My constituencies in both developing and developed countries regularly tell me they have to choose between education and food.  We have become dependent on non-governmental organisations to aid in funding students and contributing to holes in the curriculum in both emergency education environments, and systemic crises.

This is why it is not enough for governments in this region, to simply join the Education 2030 Right to Education Initiative and say they will commit to 1 year free early childhood education and 12 years of free primary and secondary school education.  Paulo Freire writes: “Those truly committed to liberation must reject the banking concept [of education] in its entirety” by calling out

What does this mean?  This means to achieve a transformative education, we need to consider the education experiences of the young in the poor regions of the world.

While Freire was accused of being a revolutionary, the Pacific and some honorific cultures in Asia depict this instead as the reciprocity of different generations in education.  Instead of proposing a flat, one-dimensional adult/youth dichotomy, they depict education as a young person who stands upon the shoulders of their elders.  Such honors and recognises entire histories of educational transformation that have already happened within our ancestral lineages.  It promotes a sustainable development model of education by also promoting mindfulness of the importance of the coming generations.  It links us together into a woven net of intergenerational kinship, promoting an inheritance of social change rather than just focusing on economic structures.

But how do we achieve such liberation?

We achieve this liberation through partnership.

To the governments and non-state actors of our region, our young people do not just need a hand-out for education.  We do not simply need you to listen to the GEM 2022 Youth Report or our students at the September event.  Our brothers and sisters need you to offer us your hands, to build a respectful intergenerational education system across our region.

Only then will the voice(s) of the many be heard.  Only then is change possible to #RightTheRules.

Our asks to #RightTheRules for the Asia-Pacific region: